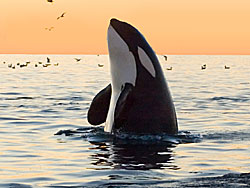 Pods of Orca or Killer Whales are often seen just off the point year round. You’ll also see Gray Whales in the bay in mid-summer. Some individual Gray Whales remain in the waters between Washington and Vancouver Island year round. Humpback whales also cruise through the Juan de Fuca Strait twice each year on their regular migration routes. Watch for them in July and August.

Smaller than the Orca, but with similar black & white markings are the Dall’s Porpoise with their white tipped dorsal fins. You’ll see these porpoise, Pacific white-sided dolphins and Bottlenose dolphins traveling in pods throughout these waters all year long.

So make good use of the binoculars in the Tea Room and keep a sharp lookout for them breaking the surface and for their telltale spray!

If you’re down at the Beach House, you’ll frequently see our family of Otters playing or doing the back float while eating shellfish or spiny urchins.

Harbour seals also scour the rocks just off shore looking for rock cod. You can usually tell they have one by the flock of seagulls hovering close by waiting for scraps. The larger California Sea Lion also cruises through these waters. If they are close enough one way to distinguish them is to look for external ears (sea lions have small ear flaps, but seals don’t). Also check the way they submerge. In general, seals sink (tail first) and sea lions dive.

In the shallows along the shore, you may spot a Great Blue Heron patiently waiting for an unwary fish.

There are 2 low tides each day, which are a great opportunity to go tidepool exploring. You’ll find Green Surf Anemones, Spiny Urchins; limpets; Gooseneck Barnacles; mussels; crabs; sculpins; dozens of snail species; chitons; even the occasional flounder that doddled as the tide went out.

Back at your cabin, you’re likely to see Stellar Jays; hummingbirds; Pileated Woodpeckers; Ruffed Grouse; and overhead, Bald Eagles; ducks; and Canada Geese. Those masked bandit, racoons will show up at meal times (don’t invite them in!) and when it’s wet out, salamanders and giant Banana Slugs — sticky, terrestrial mollusk of the Pacific Northwest.